Around the country in eighteen venues – No. 8, King Tut’s

They say…Tom McRae (singer-songwriter who released the live album ‘Tom at Tut’s’ in 2011): “Everything about King Tut’s is special. I don’t know if it’s in the bricks and mortar by now, or the people who run it, or the Glaswegian audience’s sense of humour and occasion, but you feel it the minute you walk in the door. Giants bestrode that stage, on their way up and on their way down, and plenty of us who never made it past the lower steps of fame’s crooked ladder are just happy to keep coming back.”

“As a performer you can’t hide from the crowd, and as part of the audience you feel like you’re in the band. That’s how a gig should be, not watching midgets on a jumbotron in a stadium – no offence to Bono, I believe he’s slightly over 5ft – but you should be able to taste each others’ sweat. Some of the most memorable shows I’ve ever played have been at Tut’s – it’s always an achievement to get the special King Tut’s Whisky for selling it out, several nights in a row…I dream one day of getting my picture on the wall, or possibly being listed in the many, many names of people who have played there over the years. But until then I’ll keep coming back – if they’ll have me, partly for the excellent chilli, but mostly for the totally unique experience that is the amazing King Tut’s.”

Watch it for yourself: Check out Manic Street Preachers return to King Tut’s in 2010 as part of the venue’s 20th birthday celebrations

Around the country in eighteen venues – No. 7, Market Bar

They say…Tom Morton (BBC Radio Scotland broadcaster, author and journalist): “I can’t honestly remember my first visit to Inverness’s Market Bar, or the last, or many inbetween. Drink was taken. Other bars were often visited. Yes, bands were heard, but who they were, what they sounded like…

Was I there for one the legendary Proclaimers gigs? I don’t think so. I saw James Hunter, soul singer, gazing stunned at the sheer rammed tininess of the place. I have been squashed into pulp during appearances by local heroes whose names have vanished into the stickiest of sticky carpets. It can get so busy you can barely breathe. But Rob Ellen was always there, I think, promoting or banging on Congas. Or Bongos. Or something. Not a Mazda Bongo. That’s a van, and it wouldn’t fit.

Technically, it’s the lounge of the Market Bar, doon a dunnie, up a stair. It used to smell of burgers from a nearby carry-out. It is possibly the smallest venue in Scotland, smaller than a Barratt Homes kitchen. Everybody has played there. Well, not Zeppelin or Guns n’ Roses, but Billy Connolly. And…err…Billy Connolly.

And me. I think. As I say, my memory these days. All I can tell you is this: It’s the best venue in Scotland.”

Watch it for yourself: Check out blues dynamo Dave Acari take to the…stage?…at the cosy Market Bar.

Around the country in eighteen venues – No. 6, Tolbooth

Year: Renovated and re-opened in 2002 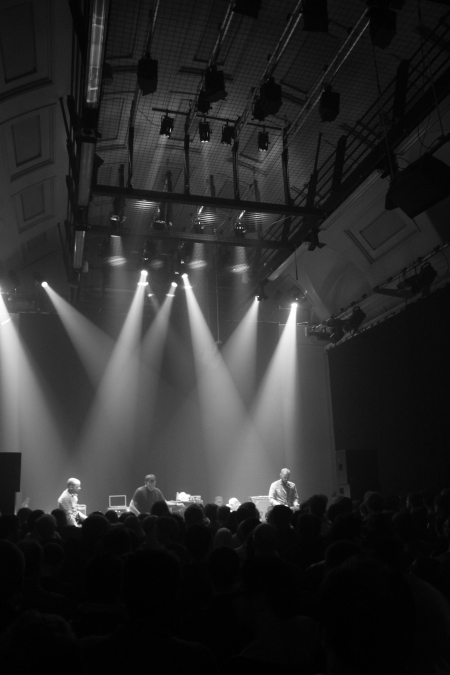 They say…Stephen Hume (Tolbooth Music Development Officer): “The thing that sets the Tolbooth apart from other venues is the rich mix of genres that the programme touches upon, from experimental music, to jazz, folk, world, roots, classical, rock, pop, metal and more. All at an incredible standard and performed in a building that is steeped in history, but with a modern renovation, it is quite a unique proposition. A thought deeply ingrained in the building’s ethos is putting the artist first, so we try and go that extra mile to look after the performers, whether for a one off show or if we’re working with them longer term to commission a new piece of music. The flexibility of the building is also a huge asset. A lot of our shows are an intimate – 165 theatre style – seated affair or with a push of a button (to get rid of the seats) and a fake wall we become a 200 capacity standing venue that looks completely different.”

Watch it for yourself: Check out this video tour of the venue and building taken by a work experience chap – proving the point that workies do more than just make tea (it’s usually a bit too milky anyway)

Around the country in eighteen venues – No. 5, Ironworks

They say…Colin Macleod (The Boy Who Trapped The Sun): “The Ironworks is a surprisingly intimate venue for its size, and probably the best sounding venue in the Highlands. I might be biased though as it’s one of the best headline gigs I’ve ever had.”

Watch it for yourself: Check out Scotland’s favourite sons Frightened Rabbit play the Ironworks way back in 2009.

Around the country in eighteen venues – No.4, Grand Ole Opry

They say…Steev (Errors):  “The Opry show [25/02/10] is definitely one of the most memorable we’ve done in Glasgow. The walls are adorned with American Wild West artefacts, a huge mural of a desert strewn with cacti fills an entire wall and a giant neon cowboy hangs above the stage. The staff were the most genuine and lovely people we’ve ever dealt with who, despite being used to dealing with country and western music and mostly old enough to be our grandparents, seemed intrigued by our presence and our style of music but never critical of either. The bar is cheaper than most student unions – just make sure you obey the queuing etiquette or the lovely staff won’t hesitate in booting your baws for you. In this age of generic, phone-sponsored, pie-less* venues, it’s reassuring to know that music fans are willing to travel out of their comfort zones in order to experience live shows in spaces as truly unique as the Grand Ole Opry.

*The Opry staff serve pies in between bands.”

Watch it for yourself: Mogwai played the Grand Ole Opry in January 2011. We’re not sure if cowboy boots were worn.

Around the country in eighteen venues – No.3, Sneaky Pete’s

They say…(Louis Abbott, Admiral Fallow): “I’m happy to say that Sneaky Pete’s is one of my favourite venues to play. I have played there with a number of bands and due to the room’s warm set-up and intimate size, it’s the perfect venue for a touring band in a city that is often tricky to get a reasonable turn out from. That said, as an Edinburgh boy I’ll always give the capital the benefit of the doubt. As for ‘Pete’s’, it’ll always be the venue we got our first (and probably last) encore in. Thanks Edinburgh!”

Watch it for yourself: Check out the hotly-tipped Bwani Junction play to some (excitable) fans back in July last year…

Around the country in eighteen venues – No.2, The Old Bridge Inn

No.2: The Old Bridge Inn, Aviemore

They say…Stuart Dougan (French Wives): “The Old Bridge Inn is very probably the most hospitable venue in Scotland and the work that Gordon (Reilly, venue owner) puts into the live music is amazing. You wouldn’t think that being in such a small town that there would be scope for attracting bands from all over the country and beyond but he’s really put Aviemore on the map. Everyone is really friendly, the food is great and the whisky selection is even better. It’s also spawned the Insider Festival which was probably more fun than playing at T in the Park so he’s definitely doing something right.”

Watch it for yourself: Check out The Banana Sessions in a dimly-lit but bouncy-bouncy video playing their now famous Prodigy medley at the Old Bridge Inn in February last year.

Around the country in eighteen venues – No.1, Barrowland 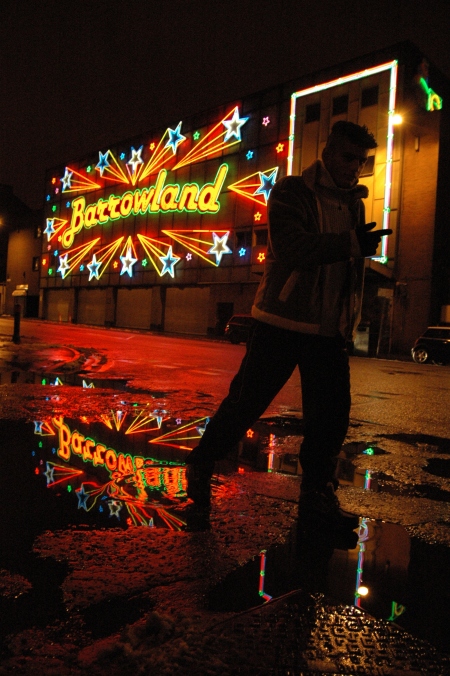 They say…Vic Galloway (BBC broadcaster, TV presenter, journalist and musician): “I’ve been going to gigs at the Glasgow Barrowland for around 25 years now…gulp! Yes indeed, I have witnessed hundreds if not thousands of bands play on its hallowed stage since the mid-1980s and loved the experience every single time – maybe not every band’s set, but every experience. I would go so far as to say the Barras is the best venue in the world. It’s some claim I know, but I’ve travelled far and wide and never been to a venue more suited to the visceral experience of a live rock n’ roll gig to this day. I tell people this across the world too.”

“To start with, the size is perfect. It’s like a club show on a large scale, or an arena show on a small scale. Secondly, you can see the band wherever you stand. Thirdly, the PA system is always excellent. Fourthly, you can get served at the bar relatively quickly. Then there’s the sprung dance-floor which literally bounces up and down with the throng…you get the idea! Most of all, it must be the ridiculously, over-enthusiastic Glasgow crowd.  They are nutters (and I have been one of them many times) and are always up for it, especially on Friday or Saturday nights when the bevy is flowing. Constantly and continually, bands rant about how the Barras crowd is the best anywhere in the world. I couldn’t, wouldn’t and won’t disagree.”

The Charlatans live at the Barrowland, 14/5/10. Photo: Michael Gallacher

“I remember the first time I saw its slightly decrepit, flashing neon sign in the distance as I walked towards it, bubbling in anticipation for the gig I was about to attend. I still get a wee buzz when I see it today. Then it’s stepping through the doors, climbing the stairs and smelling the ‘roll and sausage’ being fried on the middle-floor next to the merchandise stall. I would ogle that merch and wish I could afford everything there, but knew I might just be able to get a t-shirt if I was lucky. Then it was the final staircase to the gig, open those swing doors and marvel at the ballroom – I can almost taste it while writing this. The faded majesty, the sticky floor, the ceiling stars and the gathered tribes in their rags and feathers, all checking each other out pre-gig with pints of lager and cider in hand. Then…the performance…and the pit, the feeling of union with band and 2000-strong audience as your favourite songs of all time (certainly for that night anyway) are played from their hearts straight to your heart…absolute magic!”

“I have too many performance highlights to mention them all, but a few include The Damned (twice – punk rock craziness from band and crowd!), Stiff Little Fingers (matinee show… My mate and I were 15!), Fugazi (four bands for a £5), Morrissey (total fan-worship as people queued to hug him!), The Beta Band (a truly psychedelic night with mods, indie kids, b-boys and hippies all dancing together), Belle & Sebastian (Glasgow’s indie scene all united in one venue), Mogwai (the LOUDEST gig ever!), Biffy Clyro (blowing the roof off many times!) and most recently, Nick Cave’s Grinderman and Selkirk’s finest Frightened Rabbit both playing blinders. The list goes on, and so do the memories.”

“OK, OK…That’s it. It IS the best venue in the world…no contest, no argument, no messing!”

Watch it for yourself: Arcade Fire in 2007, complete with ear-shattering sing-alongs and crowd surfing…