After coming off a successful European tour, Rachel Sermanni is on the brink of becoming one of Scottish music’s top exports. She is releasing her debut EP in January, so we reckoned the time was nigh to find out a little more about the person behind the voice…

I meet Rachel Sermanni at a hip city centre hotel in Glasgow, an alternate universe where chairs aren’t allowed to just be chairs – they are mutant hammocks and bum-denting, oversized Smarties. She had been headlining an NME sponsored gig in the west end of the city the day before, so I assume the 20-year-old Scot has now ‘made it’ – staying in a plush hotel and everything – but that was just her manager; she slept on a friend’s floor, she says. It’s half nine in the morning and she’s raking through a tub of porridge (something which I soon find out is so much more than just a wholesome breakfast treat; it is life-saving, intervention stuff) like an intrepid explorer. For some reason we begin by speaking not of the value of hearty oats but of independent ‘green grass and daisies’ festivals, before I try my luck with a somewhat loaded question. ‘Do you not think when you get more famous, it’ll be all about the big commercial festivals?’ I ask, but she doesn’t even flinch, and rattles into a reply about having fun at festivals. Is fame part of the plan? It’s not the priority, she tells me, after prompting, but after numerous impressive support slots, a European tour and an impending EP release, it might just have to become part of the plan. “I am living the dream,” she says, stretching the vowels in an odd, American hippy voice, after confirming she is now technically a ‘full-time’ musician. “It’s a really nice dream. We were just on tour in Europe supporting Fink, and that was my first ever experience of the job, the touring thing. It was really hard and difficult in lots of different ways. But at the same time I couldn’t really have asked for anything better. It was really a sort of training period – performances have gotten stronger I think, and I think I’ve got better at the guitar. Performance-wise, I just have to learn to try and hold people and not get all sort of worried or on your tip-toes if they’re not listening – you’ve just got to put your heels in and make them listen.”

It’s not exactly hard, however, to make people listen when you’ve got a back catalogue like Sermanni does, full of magnetic, hook-ridden acoustic-leaning cuts. I ask her if she thinks she, not the music, is good at connecting with people. “Sometimes, if I’m in the mood,” she says, after a fraught few seconds of whirring thought. “I really like human interaction on lots of different levels, and I enjoy performing. Human connection was a really interesting thing when I was on tour in Europe. I really like all the people that we were touring with, but I was still getting to know them and we were in a different place every time – sometimes it sort of struck you down. There was an element of loneliness, but you were always surrounded by people. You were no more than half a metre away from somebody most of the time, so it was great to get your own space, but at the same time I think maybe that accents how lonely it can be. Sometimes I’d be sitting before a gig really trying to come out of myself so that I can speak to people on stage and really connect with them. It’s an almost…upsetting process, because I didn’t know what I was I doing on stage, and everything I said wasn’t striking with me or with them. It’s really hard to explain. Everyone gets that – some days you’re sitting with your friends and for whatever reason or you’re not quite connecting with them as you might normally do, a bit out of sorts. And it’s just that, it’s just one of those natural things.”

It’s quite surprising to hear Sermanni speak of struggling to come out of a shell, because when ever I’ve seen her live, it’s a jamboree of laughs and silly, surreal stage talk. The latter seems like part of the charm, but is it something she has had to start reigning in? “Sometimes, yeah. Although these days, I’ve sort of been learning to allow it to be, because in lots of other ways, I’m almost too sensible. I don’t drink very much alcohol and things like that. Those things just don’t really interest me. If you’re in the mood then that’s good, but I think sometimes I almost felt like that I should. These days I just let myself be whatever it is that I am.” She tells me she has only puffed a cigarette once – ‘I only did it because it was really long and cool looking, but it was a lot harder than I thought to inhale…silly things, aren’t they?’ I ask Sermanni if she indeed does have any vices. “Not any more,” she says with a face glazed in proudness, like she has just completed a 1000-piece jigsaw. “I used to be addicted to cereal. But now I just eat porridge. I keep away from cereal, it’s really dangerous for me. Honestly, if we had Cheerios in the house, I’d have to have about seven or eight bowls. And I’d still want more…but the box would be empty. There was a time when my brother and sister were younger and the only cereal we really got was Cornflakes, so when we got other cereals from other people’s houses we were like, ‘Oh that’s cool!’ Then mum started buying them for ourselves, and it was then like a race to eat as much as you possibly could. I think that’s that it came from. It really was a terrible time, and I had to wean myself off it.” 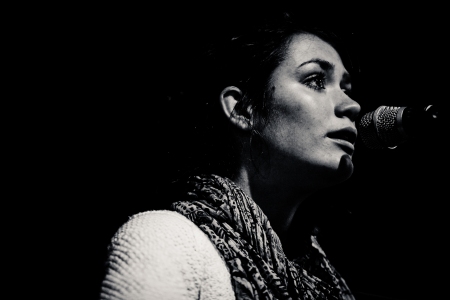 There is an undeniably endearing nature to Rachel, and this cereal-gluttony answer pretty much sums it up, a stream of oddball whimsy. Is it ‘random’, or ‘quirky’? I don’t think so. She is just naturally a little bit…weird. And bloody inquisitive too. I lose count of the number of times she says ‘Have you heard…?’ before launching headfirst into a random fact about psychology or science, whilst she often parrots to me the same question that I asked her – by the end of the morning she’s found out my Christmas day routine, my knowledge of French vocabulary and that my childhood bedroom has now, unfortunately, been turned into an office. There’s an effortless beauty about her too, but I’m not sure she even knows it.

Being a frontlady, she is undoubtedly going to get a lot of attention. But does she like being in the centre of it all? “Nah, I don’t think so. I think on stage is different because you are essentially there to have the attention on you, and this job is full of that, being the centre of attention. Yesterday at Brel and there were posters with my face on it everywhere you looked and it was like, I could really act either all shy about it – and I did at first feel like that – but then at the same time that’s almost making too much of a fuss about it in the first place. Making less fuss about it is better. That side of it is an interesting one, because if I am going to be the centre of attention, I will strive to be as honest as I can, or real as I can. Sometimes I put on a really high, sweet voice when I’m on stage, and I can hear it in my head, and I almost force myself to speak lower when I’m on stage, because you’ve got to…dunno, you’ve sort of got to wear the trousers a little bit otherwise people will just think you’re sweet and that’s all you are, and your songs don’t really get heard.”

Rachel is from the Highlands, although I’m not entirely sure you can tell from her peculiar accent, a quizzical tombola of ups, downs, lilts and wilts – but the ‘Ls’ and ‘Ts’ certainly roll like the hills around her home village, Carrbridge. Her base is now back at her childhood home after a soujourn in Glasgow, but she’s constantly on the move. So what role have the elder Sermannis played in Rachel’s rise? “My parents gave me loads of support,” she says. “When I said I wasn’t going to uni for a year, and will play music instead in Glasgow, my mum was sort of, ‘You should think about uni’, but right now they understand and they are really supportive. I probably ate a lot of their money for the first months of being down in Glasgow, but now I don’t have to do that, which I’m really happy with. It’s not like I’m making any money, but I’m on enough, and I’m not living anywhere to pay rent, so I can survive,” she tells me, contently. “I guess I’m just a bit of a roaming minstrel.”

Knowing Rachel’s penchant for silly talk (see our first interview with her back in October 2010) we later asked some sligtly more frivolous questions. You can check them out here.

Rachel Sermanni’s debut EP ‘Black Currents’ is out on 30 January and can be pre-ordered via her website.

This entry was posted on Thursday, December 8th, 2011 at 17:22 and is filed under Uncategorized. You can follow any responses to this entry through the RSS 2.0 feed. You can leave a response, or trackback from your own site.