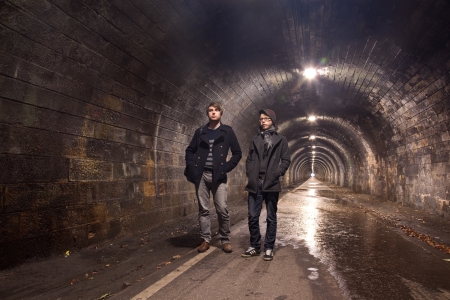 You seem pretty proud of your city – is Edinburgh a place which has influenced the sound of your music?

Keir MacCulloch (music/production): It can look pretty dramatic at times and it would be hard to say that it hasn’t found its way into our music on some level. It wouldn’t be a conscious thing, but we do draw on influences around us.

Angus Carbarns (lyrics/vocals): Although neither of us are from here, I think it’s worked its way into the music somehow. It’s an inspiring place to be – just walking around the city can be enough to get ideas going.

Your MySpace is quite bare of upcoming gigs at the moment. What’s the masterplan as far as releases and touring goes?

A: We’re deliberately keeping things a bit more quiet on the gig front just now, apart from one in Glasgow.

K: Yeah, MySpace seems like more of a hassle than anything else to be honest (due to the most ridiculous and buggy interface). We have a Facebook and website that we tend to update more regularly. As for gigs, we have one coming up soon at a Tronic night in Glasgow which we are really looking forward to. It’s their 5th birthday and they are a great bunch of guys so it promises to be a great night.

As far as music scenes go, is it safe to assume you prefer the capital to Glasgow? And if so, what’s your favourite venue in the city – be it to play in or to see bands in?

K: For me, I definitely enjoy living in Edinburgh more so than Glasgow. But you can’t deny the music scene in Glasgow does tend to be a bit more exciting. That said, I really like The Wee Red Bar in Edinburgh – really good atmosphere.

A: I stayed in Glasgow on-and-off after I left school (many years ago) and used to go and watch a lot of local music which was great. Although Glasgow is traditionally seen as the city that produces better music, I enjoy that Edinburgh has some distinctive features and bands of its own, and some good club venues like Sneaky Pete’s. There’s something slightly different about the two places, but it’s hard to pinpoint what exactly.

You guys have a pretty full sound – is it tricky to recreate this live since there are only two of you?

K: Thanks to some wicked advances in music technology, we can recreate our sound with a bit more ease than we initially thought. My background before Capitals was performing solo under the name Araya, which was purely software based live shows. With this in mind, we have tried to turn this software environment into a more ‘band’ format, with all live music being synced to the software. It can be a nightmare, but pretty satisfying when it works.

A: Yeah it’s been a weird learning curve, but one we’re getting more used to now. For ages, the thought of playing live just resulted in a headache. But now we’re learning how to mix these two elements together, which was part of the concept of the band in the first place: to find some middle-ground between electronic and organic music.

If you had the opportunity to turn Capitals into a trio for one night only to play with a musical hero of yours, who would you choose?

K: I’d say Richie Hawtin. He’d have some pretty amazing tech to bring to the table.

A: Good question! Man, I don’t know, there are so many good people to choose from. Maybe John Stainer from Battles on drums, that’d be pretty cool.

And finally – Hibernian or Hearts?

K: I actually work for Hearts, running a community music project.  They also let us rehearse in Tynecastle stadium…so I’m with Hearts.

A: I’m going to have to be controversial and say Hibs, as my dad’s side of the family are pretty much all Hibees. But the staff at Hearts have been so helpful to us, so actually I’ll change my answer to ‘on the fence’.

This entry was posted on Thursday, February 3rd, 2011 at 09:00 and is filed under New Talent Thursday. You can follow any responses to this entry through the RSS 2.0 feed. You can leave a response, or trackback from your own site.