This was a lot harder than I thought it was going to be. I’ve tried to choose five completely different photographs, from small intimate gigs with acoustic guitars to all out rock gigs with everything cranked up to 11.

1. I was lucky enough to go and see one of my favourite bands Yo La Tengo last year, this was shortly after stumbling into the world of gig photography. There was no three song limit for the two photographers who were there. About 15 minutes into a rendition of ‘I Heard You Looking’, Ira Kaplin started to spin his guitar around and move to an empty part of the stage. I was almost motionless, was away in my own wee world, then snuck back into the pit and just clicked away not even thinking about exposure or ISO settings. 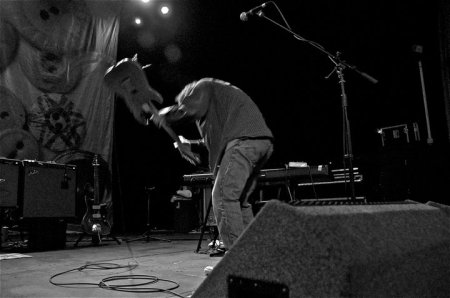 2. Just before Christmas 2009, Snowgoose played at the Captain’s Rest, supporting BMX Bandits. I try and go to every Snowgoose gig as I love the music and Anna who sings in the band has a beautiful voice. At their last gig this snap was used for the flyer much to my surprise and indeed the band’s surprise as well. 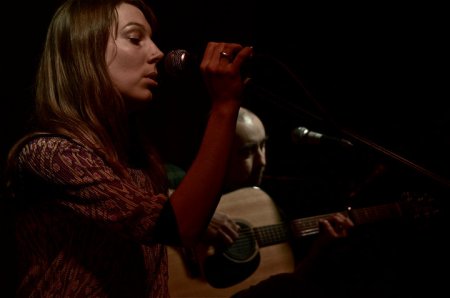 3. I’d only heard of Thrice a few days before the gig. I was well impressed by them. They played what seemed a really long set of songs. Some band’s songs all sound the same, but for Thrice this was not the case. I chose this photo as it was a mistake – I did not mean to take it but when I loaded it up on the computer, it actually looked quite good.

4. Nazareth at Glenrothes. This was at the end of a long tour so a home town gig was going to be something special. I was actually surprised how many songs I actually knew from the set. This photo is my ‘guitar hero’ photo – the guitarist is in the middle of some ‘widdly diddly’ guitar solo. As you don’t see his face it would work well I feel as a big tour poster or something similar.

5. The stroboscopic, the quadrophonic The Twilight Sad. The gig was being heavily promoted for the use of a quadrophonic sound system. It was also another one of those gigs that I’ve found myself at this year where the lighting engineers have just bought in strobes and want to use them any chance they can in every song. It might seem a bit of a nightmare to take photographs in but as I’ve said to a few folk, just listen to the music, watch the band and take photos in time to the music.

This entry was posted on Friday, May 7th, 2010 at 10:53 and is filed under Photo Friday. You can follow any responses to this entry through the RSS 2.0 feed. You can leave a response, or trackback from your own site.